Aesthetics of Dhvani in Theatre-Part III

Aesthetics of Dhvani in Theatre-Part III

The classical theatre of Kerala rests on the solid foundation laid down in Vyangyavyakhya (VV). 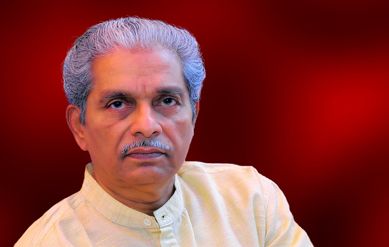 The classical theatre of Kerala rests on the solid foundation laid down in Vyangyavyakhya (VV).

As I had mentioned before Kulasekhara had made two innovations in the performance of those days – retrospection and suggestive acting.

Retrospection: The direction given by the texts at the entry of every character is “tatah pravishati”, which means enter after ‘that’. The question is after ‘what’? The spectators have every right to know it. But the text is silent. This is addressed by Kulasekhara who insisted that every actor at the time of his/her first entry shall introduce the character to the audience and narrate the past events up to the present. In Subhadradhananjaya for example Dhananjaya on his first entry shall convey that the Pandavas were living in the forest, Narada had made some arrangements for the five brothers to live with Panchali; he had to break it; as an act of atonement he started for the year-long pilgrimage and at the end of it he is moving to Dwaraka to meet Subhadra being enamoured by her charm. This is poorvasambhadha connecting the present to the past. Only after establishing the character in this way, he can begin to enact his role prescribed by the text.

The actor has to confront many hurdles here. In the absence of the text, no vachika is possible which makes the situation more complicated. But this also gives him an added advantage. He is not chained by the text.At the same time, it is a challenge too. While recounting the past events the actor who was an imitator of the character now has to assume the role of a narrator. Dhananjaya, in the course of narration, transfigures into Narada, Dharmaputra, Kunti etc. The actor on the stage transforms himself into a stage where all these reflected characters pass through. This is an exhilarating trans-dramatic experience both for the actor and the spectator. This is technically called pakarnattam – multiple impersonation.

Actor as a narrator

But this is not allowed by Bharatha. He does not permit imitated characters to assume the same costume and roles of reflected characters. The process of retrospective narration enacted by a single character elevates the multi-character conventional stage to the highest level of artistry. The role of the actor in a performance is also redefined. The actor enters the stage imitating a particular character. But now, two more functions are imposed on him – that of a narrator and of an interpreter. The actor in the conventional Sanskrit stage is an imitator whereas in the innovative stage he is a narrator and interpreter too.

As for the suggestive acting, we have to understand that Kulasekhara classified the audience into two layers: Prekshaka, the real connoisseurs and Nanaloka, the ordinary folk. When the Vidushaka in Subhadradhanajaya enters saying, “Bhagavanto maharsaya ! biksham datta” (Oh sages, please give alms), the Nanaloka is satisfied with the literal meaning. But the suggested sense is thereafter communicated by the actor through subtle eye movements to the Prekshaka: it is not food that Vidushaka is asking for, because the feminine gender in biksha suggests a woman, that is Subhadra who is deeply in love with Arjuna. But her elder brother has promised to give her to someone else. “We have come to seek her hand as alms for Arjuna”. The actor can interact with the prekshaka in this way until both are satisfied. The technique demands both imagination and multiple impersonation on the part of the actor. This process of elaboration lengthened the duration of the play.

Vyangyavyakhya- The base of acting

Only one Act could be presented in one night as against the practice of completing the whole play in the same time. But this underwent further changes during the post-Chera period beginning from 11th century that witnessed the growth of Malayalam and the emergence of Koodiyattam, the Kerala version of presenting Sanskrit plays. While the actors anchored on thematic elaboration, Dhvani was reflected in the verbal uttering of Vidushaka in Malayalam. In the book, I have given the dramatic text according to VV and also the traditional one followed in Koodiyattam separately to highlight this development. You can see how theatre became a cultural tool for political and social discourse as reflected in the plays ‘Mantrankam’, and ‘Bhagavadajjukam’.

Also, you can understand how a single play leads to innumerable off-shoots which are complete by themselves thanks to the ingenious technique of VV. The entry of Subhadra’s maid Kalpalathika in Subhadradhananjaya and her retrospective narration giving rise to Nangiarkoothu; the retrospection of Chamberlain blossoming into a full performance text of ‘Kanchukiyam’; reconstruction of the entry of Kaatyaayani and recapitulation of Subhadra also attaining the status of a complete performance – all are striking paradigms. The pan-Indian appeal of the book in contemporary times is reflected in the way in which the same play is interpreted in different ways by anchoring only on a few verses from the original text. This implies essentially upstaging the playwright by the actor/director.

Admittedly, all the classical art forms of Kerala including Krishnanattam, Kathakali, and Mohiniyattam were highly influenced by the acting techniques of Koodiyattam. In fact, the classical theatre of Kerala rests on the solid foundation laid down in VV.